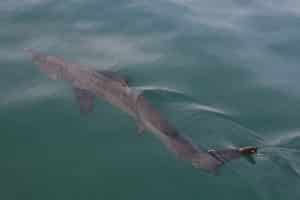 Scientists shed more light on what attracts dolphins, sharks and whales to the Celtic Deep off the Pembrokeshire coast: see BBC news.
A “hidden larder” for sharks and whales has been discovered off the west coast of Wales by a pioneering marine robot.
The high-tech mission involved sending an unmanned glider to an area around 50 miles (80km) south west of Milford Haven, called the Celtic Deep.
The glider travelled 372 miles (600km) in 30 days, undertaking nearly 3,000 dives to the seabed.
Data from the robot shows a previously hidden plankton concentration around 30m (98ft) below the surface.
Scientists said this marine “larder” is likely to be a foraging area for a range of creatures.
We had a lovely offshore trip last week focusing on seeing the lighthouses. We’ll be heading back out there again soon looking for dolphins :-).