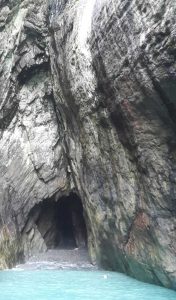 We used to be able to get into Ogof Organ, aka ‘the Canyon’ very often but there was a significant rock fall a few years ago. It deposited a great deal of rock right into the area we used to turn the boat in.

It also created a decent storm beach, which is ideal for pups.

We made the most of high tide to go in this week and were rewarded by seeing the first pup of the season. That title usually goes to Ogof Colomenod so we were really surprised to see an early pup in the canyon. Afterbirth was still on the beach so it must be a very recent arrival. There will no doubt have been the odd pup born even earlier this year (they have been recorded as being born in every month of the year on Ramsey), it’s just that this is the first one anyone has seen this year. So we’re rather pleased to have such a bonus 🙂 .

Of course we didn’t have a decent camera with us and the zoom on my phone is rather non but the little white blob is indeed a pup. It’s actually a good size for a newborn (thank goodness for binoculars!) and it has a good chance of survival in the canyon because in addition to the storm beach it was born on, there’s a large boulder at the entrance, which does a great job blocking storm swells.

This video of our boat in the canyon taken a few years ago shows what the canyon was like before the rock fall. It’s a spectacular spot, particularly on a calm sunny day.