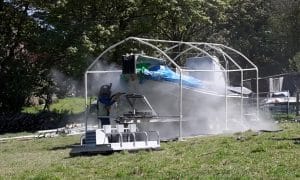 Shearwater is used to tough conditions at sea but this week she’s had a sandstorm to deal with.

She’s been sand blasted (my baby!!!) by a man in a Darth Vader helmet with a huge compressor. We’re used to her looking rather friendly in yellow but when her tubes are tarped up in black and she’s blasted back to aluminium she looks rather lean and mean

The hull is now white again and the yellow paint has arrived for the console. Who knew there were so many shades of yellow! Boats need to be painted with anti fouling each season but fortunately you don’t have to do a full blast and paint (6 or 7 layers…) often.

The idea is that when we rehome Shearwater they won’t have to do anything significant for some time. Painting requires days of stable good weather so it was either do it now or do it in September if weather allows. We’d prefer not to be spending too much time painting hulls in retirement

. It’s 15 yrs since it last needed to be done so she should be good for a long while!

We’re looking forward to getting back out to sea in Whit week.