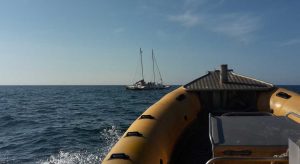 One of the great things about our work is the variety. Last week we were asked by Red Bull to pick up a cameraman from a catamaran 15 miles or so north west of St Davids Head and take him back to the mainland. Yeahy. Sounds like fun.

This is the sort of thing where some techy stuff can be useful. We set off with the latest co-ordinates from the catamaran’s AIS updates, put them into our GPS and then factored in the likely effect of tides etc. The last bit was decidedly non tech, done in Tim’s head 🙂 .

After a few miles we saw a likely vessel dead on course (good effort, Tim 🙂 ) and as Shearwater flew the lovely Hecate came into view. 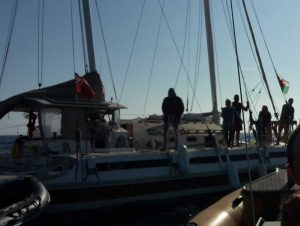 Hecate is the swim support vessel for Ross Edgley, who is swimming around the UK – yes actually swimming all the way around the UK. He was in remarkably cheerful form for someone who has been spending so much time fighting his way through salt water recently.

His reason for the swim is apparently because “I’ve got unfinished business in the water” and to encourage others to “get fit for purpose”. You can read more about his challenge on his Ross Edgley Great British Swim blog.

It was a beautiful evening when we got to see Hecate (a lovely vessel for those who like boats) but even in the unusually stable weather and sea conditions we’ve had recently this is clearly a monumental challenge, not least because of the strain of long distance sea swimming and the long term physical impact of salt water. 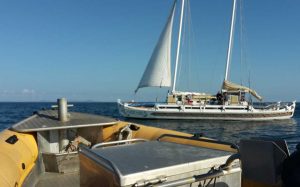 We left the Hecate team discussing tides and Ross Edgley preparing to get back into the water. We had the enviable job of taking the Red Bull cameraman back ashore, enjoying gannets and shearwaters flying alongside as we headed back towards our normal waters. In the right sea conditions the boat glides effortlessly at speed, flying alongside the birds she was named after.

We are looking forward to being able to focus on other projects when we retire in September but right now it really is great to be at sea.