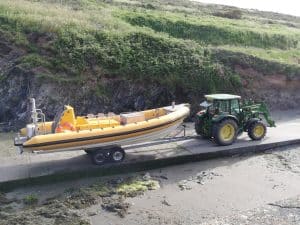 This season we’ve been so very conscious of community support, from neighbours cheerfully teasing, “Get your boat in the water!” as they drove past Shearwater’s field, to the lovely people at St Davids Escape Room who lent us their tractor to launch while our Land Rover was being serviced. 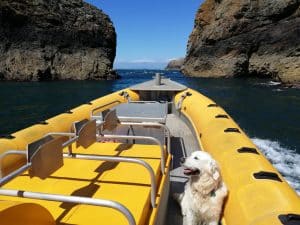 We delayed launching until July but the call of the sea was strong and we didn’t need much nagging to be persuaded to “get our boat in the water”, much to the canine boss’s delight. As usual he was our first passenger of the season and he grinned his approval all the way round Ramsey as we said hello to the island for a new season.

So far it’s been quite a season for the wildlife. We spotted the first seal pups of the season and are now up to 8. We’ve had dolphins visiting inshore in Ramsey’s waters and we’ve had some spectacular sightings of seals playing lazily around and under the boat. It is so great not to have to worry about propellers when watching wildlife. It doesn’t matter how close seals and dolphins come to the boat, she’s prop-free so stress-free around the wildlife. 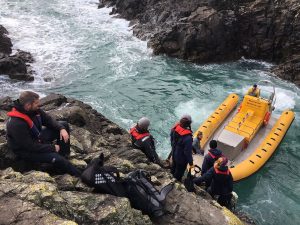 Tim’s taken the University of Exeter researchers out to Grassholm and back a few times to do their gannet research, successfully landing them and all their research kit and picking them up from Grassholm’s forbidding rocky coastline. Shearwater’s jet may be awesome fun but it’s also what allows us to manoeuvre under power in tight spaces to do jobs that conventional RIBs just can’t. She’s very good at just quietly getting the job done. (Photo shows Sky TV crew not Exeter researchers.)

We continue to be amazed by the number of passengers who’ve joined us regularly over the years who’ve been calling this year again teasing, “We know you’re trying to retire but when are you running trips?”

The answer is daily when the weather’s good but fewer trips than we used to do.

We’re easing our way into this retirement thing 🙂 .