Heading out to Grassholm in the afternoon autumnal sunshine can be pretty amazing – it’s like a sunlit GPS – drive along the line of sunshine. This was taken late October when we took a team of archaeologists from the CHERISH project out to Grassholm with an RSPB team. My phone told me I’d done over 9,000 steps – nope – just 2 runs out to Grassholm 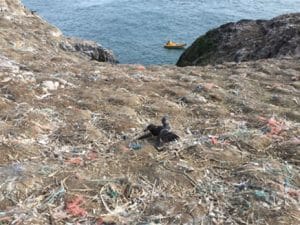 This year’s trip to free gannets tethered to their nest by rope, line and plastic was delayed by weather so we were relieved to be able to get everyone out and back safely. Tim cut free 9 of the 19 birds rescued and was rewarded by seeing a juvenile gannet take straight to the air immediately after rescue – quite a privilege to see a bird take its first flight. Of course he was also attacked and excreted on but that’s par for the course with gannets!

Tim’s first trips to Grassholm to free gannets were back in the 1980s with Shaun White (who designed the Ribworker jet boats for this sort of work). For the last 16 years the RSPB has organised the rescue teams and worked hard to raise awareness of the problems faced by wildlife due to plastic and other pollution.

This year the RSPB teams combined their trips with archaeologists from the CHERISH project. Grassholm isn’t just interesting because of its gannets. We heard all too brief fascinating tales of the Stone Age and Vikings in the area.